Ah You done good! Props to Ballards for international transfer 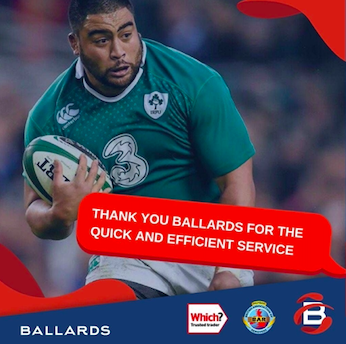 Our team of home removal specialists helped score a flawless transfer for an international rugby star during a move from Newcastle to France.

Rodney Ah You, known for being a prop for the Newcastle Falcons rugby team, recently made the move across the channel to Brittany, France to join the RC Vannes, a french rugby union club. As a prop, he’s a vital part of the team – essentially ‘propping up’ his teammates by being on the front line of defence and pushing against the opposing team during a scrum.

After struggling with a number of construction issues, Rodney’s move date was postponed on multiple occasions – but our specialist team of hauliers carefully managed expectations and the diary!

“Waiting for our house to be built in Brittany, the date changed 3 times on us and Ballards Removals were very accommodating!” said Rodney. “When we finalised the date, Matthew had our date for moving things so that our furniture could arrive immediately the following week, which we were very grateful for.”

“The two guys that arrived with the truck moved things into our new home for us, they were so polite and friendly and made the move much more enjoyable in making sure our things were moved into the rooms we needed them in (and with a two-storey house and winding stairs, it wasn’t an easy job to do!)”

“Their hard work was very much appreciated and we would definitely recommend your company to anyone who is looking for a moving company for a local or international move!”

Haulage without the hassle

With his career being in the thick of several scrums, Rodney has moved house many times – but this is only his second international move with all his possessions. We’re glad that we were able to take the strain out of the process for you, Rodney!

But don’t simply take our word for it (or Rodney’s for that matter). If you’re moving home, locally, nationally or internationally, you need a skilled team who can lift, catalogue, transport, and unpack all your fine things and furniture – and that’s where we come in.

Get in touch today to discuss how we can help you move onwards and upwards – wherever your destination might be.